Airborne radioactivity measurements with the Learjet

In this context, additional equipment for the measurement of radioactive substances has been adapted to the Learjet. The most conspicuous modification is a ‚High Volume Sampler‘ attached to the lower part of the cargo door of the aircraft. After passing the isokinetic inlet the sample air is passing a filter element accumulating aerosol particles. The filters can be changed during flight by the operator using the airlock provisions of the sample unit. 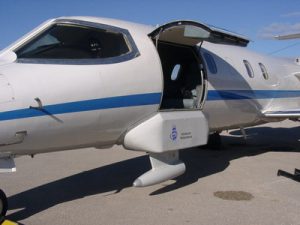 One or even two Gamma-Spectrometer are integrated into the instrument racks allowing the instantaneous in-flight analysis of particle-bound radio nuclides. Further instrumentation is adopted to measure radioactivity of gaseous Iodide and total activity. 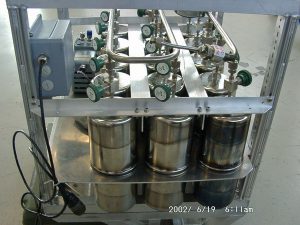 Some substances can’t bee measured continuously. For those measurements a bulk air sampling system has also been developed. The air samples are stored in canisters for subsequent analysis of VOC or Radon in the laboratory. Recent improvements of the compressor system allow the probing and analysis for Krypton-85 in altitudes up to 35.000 ft.

On behalf of the German Weather Service enviscope performed measuring flights during the research program VERTIKATOR. Within the subproject Alpine Pumping special focus was set on the transport of air masses in the vicinity of high mountains. The orographic induced vertical transport strongly effects the distribution of trace gases in the troposphere. The contribution of the Learjet was the detection of a rarely measured tracer: Radon and its decay products! 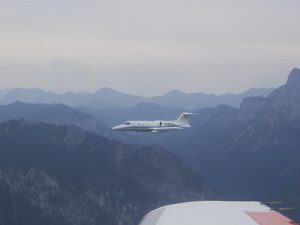 Radon measurements above and below(!) alpine summits 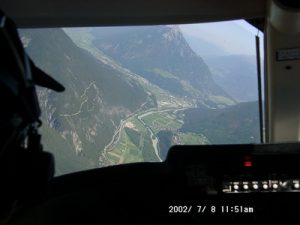 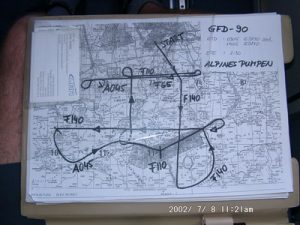 The equipment was welcome in the frame of this experiment, because Radon is a perfect tracer gas. It is emitted naturally by soil surfaces and get mixed into the boundary layer. The objectives of this experiment was mainly to learn how surface near air masses from the lowlands in the vicinity of a mountain range get mixed into the free troposphere driven by the orographically induced vertical transport.

VERTKATOR was a DFG funded project in the framework of the AFO2000 programme. The subproject Alpine Pumping experiment has been performed from the DLR base in Oberpfaffenhofen. The flight pattern were coordinated with 4 other aircraft participating in this joint experiment.

For more information on these measurements please refer to the Radioactivity Monitoring webpage of the „German Weather Service“ (in german).