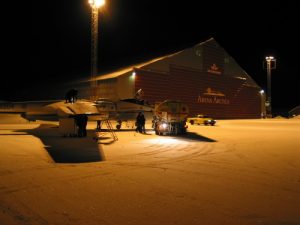 The polar night is still dominant when the Russian stratospheric research aircraft „Geophysica“ is in preparation for one of a series of measuring flights in the polar stratosphere.

It seems that the tremendous cold does not affect the Russian colleagues, while most participants of the teams from different European nations prefer to stay in the warm „Arena Arctica“ hangar at Kiruna airfield. 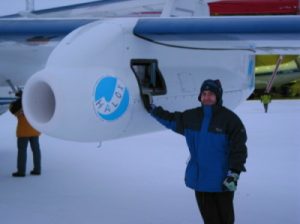 During the European Polar Stratospheric Cloud and Lee Wave Experiment (EuPLEx) enviscope members shivered with the other participants, not only due to the could environment but mainly caused by „fevering“ with the instruments…..

Keeping one years development of the HALOX instrument in mind enviscope was curious about the handling and proper function of the instrument during the first campaign. When the „Geophysica“ returned from its mission all teams looked eager for their instruments: 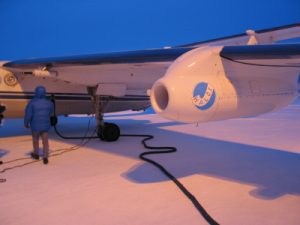 In case of HALOX the first information about proper function was given by the correct position of a mechanical flap, constructed by enviscope and mounted to the inlet of the duct. If the instrument was shut-down correct it switched to a position where it prevents penetration of droplets and ice particles into the analysis ducts while flying in the troposphere.

Reviewing the gathered experience with HALOX the new set up was of great help. The modules prooved well, were easy to handle, and made calibration procedures and maintenance much less time consuming.

Beside HALOX other experiments with inputs from enviscope were flown during EuPLEx, namely FISH and WAS: