The EUFAR Joint Research Activity JRA1 funded by the European Commission under FP7 aims at the Development and Evaluation of Novel Compact Hygrometers for Airborne Research (DENCHAR). Within this activity enviscope was  responsible for setting-up and performing an In-Flight Intercomparison Campaign (IFCC) in order to compare the novel new in-situ hygrometers developed by the partners in-flight with more sophisticated and well established hygrometers (Ly(alpha)-FISH and CR-2).

During the flight campaign, which took place between May 24 and June 1 2011, the instruments have been tested under different flight and weather conditions between surface and 13 km altitude. This included the investigation of the characteristics of different inlets and their potential to produce possible sampling artefacts for both, measurements inside and outside clouds. Special emphasis was set into the investigation of their performance under conditions of ice super-saturation.

Learjet 35A, D-CGFD, shortly before take-off for the first flight (Volcanic Ash and DENCHAR test-flight) on May 25th, 2011.

In the following table the instrumentation of the aircraft for the intercomparison flights are listed. The core instruments were provided by the partners of the EU project while the so-called „no-core“ instruments were choosen in order to provide a much better in-situ view on the in-flight performance of the different hygrometers and their inlet systems in the presence of clouds in general and particularly in case of ice-super saturation.

In total four inter-comparison flights have been performed with a total flight time of about 14 hours. The start of the flight campaign was strongly influenced by the eruption of the Grimsvotn-volcano in Iceland, which led to a partial closure of European airspace. Since enviscope is also in charge of performing VA-measuring flights on behalf of the German Weather Service (DWD), the DENCHAR group was asked by the German government to support the VA-measurements by sharing the a/c for at least one flight. Therefore, part of the DENCHAR-instrumentation has been replaced by DWD-VA-instrumentation for the following VA-flight, which could however also be used as a test-flight for the remaining DENCHAR-instruments. Together with this first VA-flight the total amount of flight hours was about 16 hours. 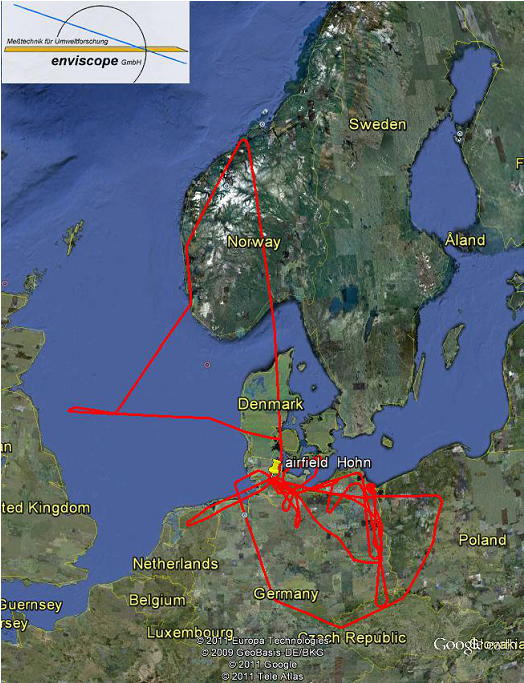 Flight tracks of all performed DENCHAR-IFCC-flights (map from Google Earth).

For the main focus of the In-Flight Comparison Campaign (IFCC), to compare in-flight the new in-situ instruments with advanced and established hygrometers, special emphasis had been taken to provide a well-designed and characterized technical set-up which allowed to run the instruments according to their specifications and without sampling errors introduced by the measuring platform Learjet 35A D-CGFD itself.

In the following scheme the set-up of the inlet line to some of the core instruments is shown:

Design of sampling lines for inter-comparison.

Special adaptations were necessary to adapt some of the new instruments to the a/c.

The SAW-instrument had to be operated nearby the inlet under atmospheric pressure and total air temperature conditions.

Therefore a hermetic box has been constructed and manufactured by enviscope which ensured proper operation of the instrument. The box had to be hermetically sealed against the a/c cabin. It had to be big enough to carry the instrument, the total mass, however, had to be kept at a minimum to be able to install the box to the window-plug. Intense strength calculations and modelling have been performed to ensure its mechanical integrity.

The UFT has been installed on the L/H underwing-pod. A new housing was designed and manufactured to host the electronic board of UFT-2 provided by University Warsaw. No electrical installations were needed, since all electronic components, including batteries, were integrated into the compact housing.

The following pictuers show the installation of SAW to the right hand window plate and of UFT to the external underwing-store.