enviscope is involved in the design, construction and certification of various inlet systems for the new German research aircraft HALO. Some of the intakes are designed for gas phase measurements; some are designed with respect to an optimized aerosol flow to the instruments. The Trace Gas Inlet (TGI) was developed by enviscope on behalf of DLR as basic instrumentation for scientific users. The Design Organisation of DLR has meanwhile received the STC from the German Authorities (LBA). The intakes CVI,  HASI, DUALER, HAI and SPARM have been realized by enviscope and finally certified by our partner Gomolzig who received the STC’s  from LBA. The HALO aircraft operated by German Aerospace Center Flight Facility Oberpaffenhofen (DLR-FX) now comes with a suite of different certified intake systems for atmospheric research.

The design of the Trace Gas Inlet (TGI) allows different tubing configurations to be integrated into the inlet structure, thus providing high flexibility to the demands of the scientific user community. To achieve this, the tubing and ducting system is built in a modular way enabling an individual sampling equipment – according to the respective demands – to be integrated by simply exchanging the complete tubing assembly. Therefore it is possible for the scientific users to prepare and to bring their own tubing assembly and mount it to the inlet during the preparation phase of an experiment. 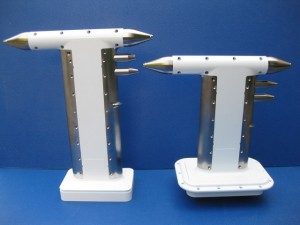 The same design principles as for the TGI have been used for the intake DUALER designed on behalf of University of Bremen. This inlet hosts a reaction chamber inside the pylon housing for the measurement of highly reactive gas species.

Aerosol measurements are possible on HALO with the Counterflow Virtual Impactor Inlet  (CVI) (on behalf of IfT Leipzig) as well as with the HALO Aerosol Standard Inlet (HASI) (on behalf of IPA/DLR), which are as well challenging design tasks. 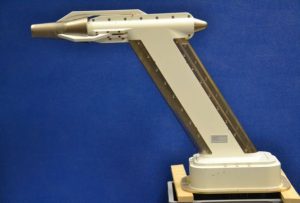 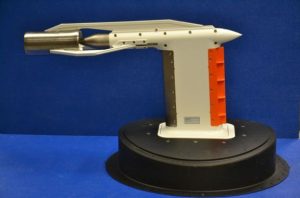 The aerosol particles have to be sampled isoaxial to the intake tube and afterwards being deccelerated in the counterflow or diffusor arrangements. To achieve this, a shroud assembly has been attached to parallelize the flow around the sample inlet tip.

Beside these in-situ probing intakes, optical inlets have been developed as well: Stabilized Platform for Airborne solar Radiation Measurements (SPARM) is an inlet hosting a radiation sensor that is actively horizontalized by a two axis platform. This has already installed on the HIAPER aircraft in the USA as well as on HALO. 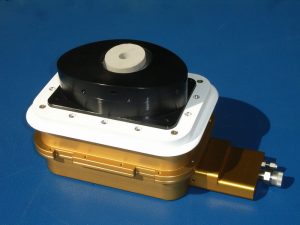 Last but not least the Hygrometer for Atmospheric Investigations (HAI) (on behalf of the University of Heidelberg/Research Centre Juelich) represents an open path inlet for water vapor measurements. The laser light beam is folded by mirrors between the two pylons to achieve an optical path length of 4.8 m. 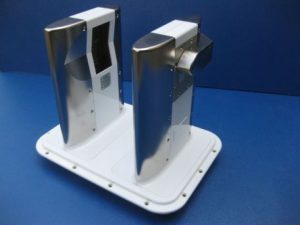 For airborne gas phase measurements an inlet system has been developed, which gives the opportunity to take atmospheric samples both in and against flight direction. The two main 12 mm dia. stainless-steel tubes can be used to host any chemically inert tubing material (e.g. PTFE). Optionally a third steel tube (6 mm dia.) can be installed. All front areas of the inlet system are heated to facilitate flights under icing conditions. The rear foot cover is removeble for maintenance purposes. This inlet system has been used on top of the fuselage of a DO128, D-IBUF and on a window of a Learjet 35 A, D-CGFD. 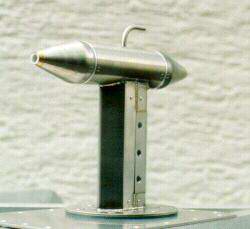 For airborne gas phase measurements an inlet system has been developped which was adapted for the first time to an Iljuschin Il-18. This inlet system prevents contamination during take off or landing and allows chemically inert measurements in the gas phase even while passing through clouds.The IWAIS is based on the impactor principle. Whole air enters the round inlet, passes a diffuser, and flows through a round jet impactor. While the smaller droplets or particles can follow the stream-lines of the air the bigger ones impact on the impaction plate. By using a classical impaction stage design the cut-off diameter can be accurately predicted by applying the design criteria of Marple and Willeke, 1976* which are numerically developed and experimentally proven. This inlet system has been used for airborne measurements aboard Iljuschin Il-18 and in a modified version aboard Partenavia P68B D-GERY. A similiar design named ICPSrj (Isokinetic Cloud Probing System (round jet)) was used for ground-based measurements within the EC-project CIME. The system, operated by IfT (Institute for Tropospheric Research, Leipzig), was used in the wind-tunnel facility at Mt. Puy-de-Dôme, France to perform gas-phase and aerosol measurements in the size range of the interstitial aerosol. 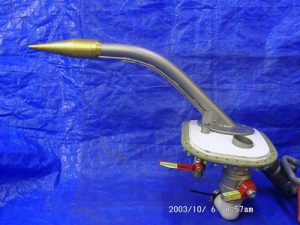 The “Counterflow Virtual Impactor (CVI)” technique for aerosol measurements is well proved but it is still a challenging task to design airborne CVI inlet systems. Meanwhile enviscope designed different types: One system is utilized on the Partenavia P68 D-GERY on behalf of the Institute for Tropospheric Research. Since the flow field at the CVI tip is critical, the complete system was built up in a flow tube upon the aircraft. Another CVI Inlet was designed for the new research aircraft ATR42 on behalf of the Centre National de la Recherche Scientifique (France). The development was done in an interactive joint venture with Université Blaise Pascal, Laboratoire de Météorologie Physique to create a state-of-the-art inlet system for dry aerosol particle probing. Multiple scientific and technical demands as well as a layout based on airworthiness standards had to be considered. The allegation of a highly adaptable design to different flow velocities and applications was fulfilled by an axial adjustable and changeable shroud. enviscope was responsible for the detailed 3D design based on flow calculations, manufactured the system in cooperation with skilled partners, and compiled the complete documentation including load analysis, stress report and drawings for the certification process. 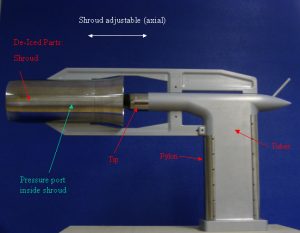